Home › Saving Animals from the Brink 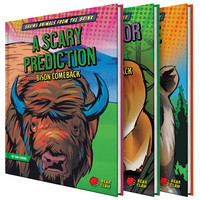 In these true tales of wildlife survival, readers discover how some of America's most beautiful and fascinating animals came face-to-face with the threat of extinction. Yet through the heroic effors of people who stepped in, these endangered animals not only came back from the brink, but also began to thrive once again.

SLJ Review of Saving Animals from the Brink

A new take on science comics that feature groups of conservationists and activists working to help save animals from extinction. This series is tied together with the shared thread of animals at risk and their connection to the creation of the Endangered Species Act. Each title addresses the critical importance of the selected species, using key terms like “apex predator” and “keystone species” to impress the importance of the animals upon readers. While the work done by the conservationists is inspirational, there is some dancing around issues, as each narrative begins at the onset of colonialism or expansionism without really addressing that issue in a decolonized way. Also, A Chemical Nightmare leaves out the major factor in DDT’s removal—Rachel Carson’s Silent Spring and its public impact, which was inspired by Charles Broley’s research.