Home › So Big Compared to What? 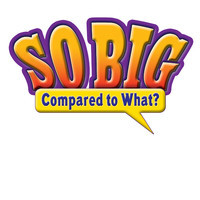 So Big Compared to What?

Huge buildings are amazing structures, but it's difficult to appreciate the sheer size of some of their features. For example, the huge video screen display at Cowboys Stadium in Texas weighs 600 tons (544 metric tons). That's just a number, but if you know that 120 African elephants also weigh 600 tons (544 metric tons)--you have a better idea of what the number actually means. In this series, readers will get lots of help in understanding the numbers behind the world's most amazing structures-- from sports stadiums and skyscrapers to amusement park rides and some of the oddest buildings ever erected. It's a fun and exciting way to learn about comparisons!