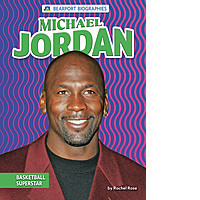 From the Series Bearport Biographies

Michael Jordan shoots. He scores! This basketball superstar dominated the sport for years. From a set of three-peat victories to a key spot on the Dream Team, his position as one of the greatest players of all time is indisputable. But how did the basketball great go from being cut during tryouts for his high school basketball team to earning a spot in the Basketball Hall of Fame? Follow along as Michael grows from athletic kid, to star college player, to NBA Rookie of the Year and beyond.