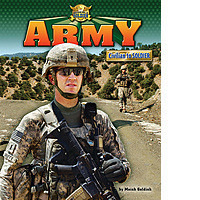 Meet Ian Fisher. When he turned 17 years old in 2006, he announced that he wanted to become a soldier. It was good timing. The United States was at war in Iraq, and Ian was eager to help out. Like thousands of other patriotic young men and women, Ian enlisted in the U.S. Army after graduating from high school. He was immediately sent to Fort Benning, an army base in Georgia, for basic combat training. There, Ian went through a grueling, nine-week program that would transform him from a civilian into a soldier. Upon graduation, he received advanced training and eventually fought in Iraq, thus fulfilling his goal of serving his country in combat. What does it take to become one of the finest soldiers in the world? Kids will find out in Army: Civilian to Soldier, an exciting look inside the U.S. Army’s basic combat training. From orientation to graduation, kids will learn all about the training process—and discover that it takes heart and determination to become a U.S. soldier.