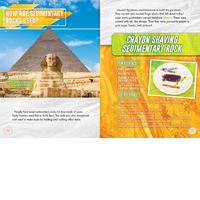 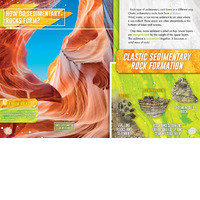 From the Series Rocks and Minerals

Sedimentary rocks are the only type of rocks that contain fossils! But thatХs not the only reason sedimentary rocks are important. Scientists study the rocks to learn about EarthХs history, while other people collect the rocks for use in construction, farming, and even art. This title introduces readers to these useful rocks, including information about how to identify them, how they form, and how people use them. Special features, including a profile, an activity, and formation diagrams, help highlight the key features of sedimentary rocks in this title for curious readers.

Sedimentary rocks may not be as flashy as gemstones, but that doesn’t mean they’re not fascinating. After all, there would be no Grand Canyon and very few fossils without them! A quick explanation of what these rocks are—“bits of mud, sand, minerals, and sediments”—also encompasses how they are identified. Next come the three main types of sedimentary rock (clastic, chemical, and organic) and the environmental conditions that produce them. This book is packed with breathtaking photos of sedimentary rock formations from around the world, as well as “Sedimentary Rock Profiles” that visually compile a rock’s stats, like hardness and composition. Infographics and diagrams detail the rock cycle and how chemical and organic sedimentary rocks form. An informative, approachable volume from the Rocks & Minerals series (6 titles). 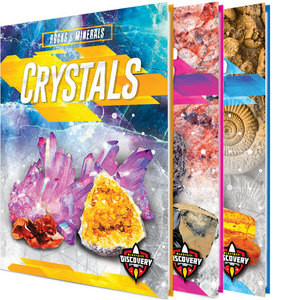