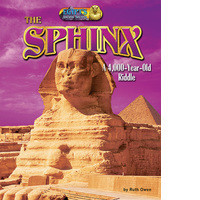 Overlooking the River Nile and guarding the Giza pyramids is one of the world's oldest and largest statues--the Sphinx. Carved from the bedrock beneath the desert, the half-lion, half-human creature has watched over the desert for thousands of years. But who built the giant statue, and why? After centuries of exploration and investigation, which of the Sphinx's secrets have been uncovered and which still remain a riddle?