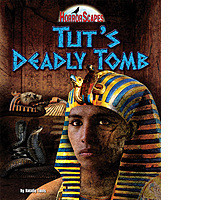 The mummy of King Tutankhamun, the Egyptian boy king, had not been disturbed for over 3,000 years. In 1922, archaeologist Howard Carter and his team discovered the ancient tomb and examined the dazzling treasures within its chambers. However, soon after the thrilling discovery, a member of Carter’s team became ill and died. Stories of other deaths connected to the tomb followed. Had an ancient curse doomed those who entered the pharaoh’s tomb? An exciting narrative format brings Egyptian history to life, while providing plenty of creepy details to satisfy young horror fans. Chilling photos and illustrations and clear, age-appropriate text will keep readers turning the pages to unlock the secrets of the mummy’s tomb.