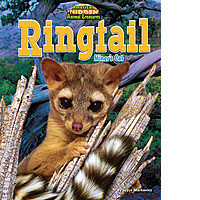 Ringtails are small mammals that are sometimes called “miner’s cats.” They got their nickname in the 1800s, when miners in California and Arizona kept them as pets because they were so good at catching mice! Today, ringtails live in the wild throughout the Midwest and western United States, but people rarely see them. Ringtails are solitary animals that avoid people, and they are active at night, when most people are asleep. In Ringtail: Miner’s Cat, kids go on a real-life adventure with biology professor David Wyatt as he tracks ringtails in an area of California called Sutter Buttes. Along the way, children will discover this fascinating animal’s diet, behavior, habitat, and physical characteristics. Large, full‑color photos and a dramatic narrative format will keep readers turning the pages.Ringtail: Miner’s Catis part of Bearport’s America’s Hidden Animal Treasures series.