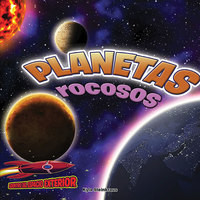 Our solar system is made up of the millions of objects in the sky above us, including the Sun, moon, stars, and planets. This book examines the four planets closest to the Sun, known as the rocky planets. All four planets, Mercury, Venus, Earth, and Mars are described with information about their atmosphere, landscape, orbits, and Fun Facts that give additional information about each of these rocky planets! This book will allow students to use observations of the Sun, moon, and stars to describe patterns that can be predicted.