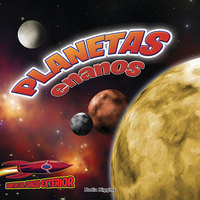 Five and counting! So far, astronomers have discovered five dwarf planets in our solar system. Pluto, which was once thought of as the ninth planet, is today classified as a dwarf planet. This book looks at the current dwarf planets, characteristics, size, and orbital patterns, as well as the three rules scientists follow to characterize these tiny, round space objects. Every day new discoveries are being made. Who knows how many dwarf planets we will find in the future! This book will allow students to understand that patterns in the natural world can be observed, used to describe phenomena, and used as evidence.