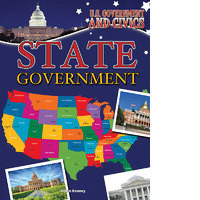 A state government is the governing body of a state. State government has many responsibilities, such as enacting the laws within a specific state, creating a budget to work on roads, fund schools, and any other unforeseen emergencies that might occur. This book discusses how the United States is a Federalist government, meaning powers are split between states and the national government. The similarities and differences between the state and national government are discussed and how each play a role in making sure their states are run responsibly and in the best interest of the people within each state! This book allows students to quote accurately from a text when explaining what the text says explicitly and when drawing inferences from the text.