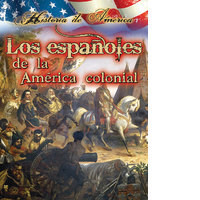 The Spanish claim to territories that are today the United States rested upon the 16th century exploits of Ponce de Leon, Hernando De Soto, and Francisco Vázquez de Coronado. The Spanish colonies in America at one time or another comprised of South America, Central America, Mexico, most of the United States and the Caribbean. Learn all about this historic time and all the conflict and compromise that came with it. This title will allow students to determine a central idea of a text and how it is conveyed through particular details.