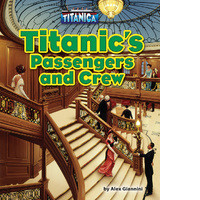 It was 2:00 A.M. on April 15, 1912, in the middle of the icy Atlantic Ocean. Seventeen-year-old Jack Thayer stood on the slanted deck of the RMS Titanic and weighed his options—Jump, or die, he thought. The huge ship had just struck an iceberg and was taking on water. Making matters worse, all the lifeboats were full. Jack closed his eyes for a moment. Suddenly, a noise like a train crash startled him. This was it—the Titanic was going down! Titanic’s Passengers and Crew is a compilation of compelling stories about the people aboard the luxurious—and supposedly unsinkable—ship. From wealthy first-class passengers like Jack Thayer to third-class travelers and crew, readers will meet and learn the harrowing tales of some of the most noteworthy people on the ship. Large-format color images, maps, and fact boxes bring the fear and panic the passengers and crew faced into clear, terrifying focus. Titanic’s Passengers and Crew is part of Bearport’s Titanica series.