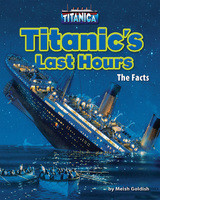 From the moment the iceberg was spotted, at 11:40 P.M. on April 14, 1912, the Titanic’s fate was sealed. Its 2,200 passengers and crew, in the course of two momentous hours, would meet their destiny in the icy, black waters of the North Atlantic. As the moments passed and the reality of what was happening began to sink in, the crew would make heroic efforts to save as many passengers as possible. In the end, however, the great ship would exact a harrowing toll from all on board. Titanic’s Last Hours: The Facts is a riveting account of the last two hours the supposedly unsinkable ship was afloat. Beginning at 11:40 P.M., the book relives the events set in motion after the brush with the iceberg and culminates with the sinking of the ship at 2:20 A.M. The fascinating moment-by-moment action along with large-format color images, maps, and fact boxes bring the nail-biting tension that passengers and crew must have faced in those final hours fully to life. Titanic’s Last Hours: The Facts is part of Bearport’s Titanica series.