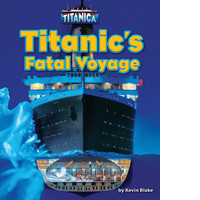 “Iceberg right ahead!” yelled Frederick Fleet, a crewmember aboard the Titanic. The ship had only seconds to spare. Titanic’s officers steered the ship to the left as quickly as they could to avoid a head-on collision. But they weren’t fast enough. The right side of the ship struck the side of the ice mountain floating in the north Atlantic. The fate of the Titanic—and its 1,317 passengers and 885 crew members—had been sealed. Titanic’s Fatal Voyage tells the devastating story of how the gigantic and supposedly unsinkable ship was swallowed by the sea on its maiden voyage. Readers will learn about the ocean liner’s journey in vivid detail, as well as incredible tales of courage and survival. The fascinating content and large-format color images, maps, and fact boxes bring the Titanic’s tragic story to life. Titanic’s Fatal Voyage is part of Bearport’s Titanica series.