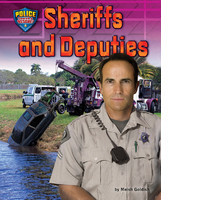 In December 2014, a fire broke out in a house in Baldwin County, Georgia. A woman who was trapped inside managed to call 911. However, the smoke was so thick that she was unable to speak. Deputy Josh Mays responded to the call. When he arrived at the scene, flames were pouring out of the house. He ran inside the burning home and spotted the victim on the floor in the kitchen. Then, suddenly, the roof began to collapse. Would the deputy be able to rescue the woman in time? Dramatic, true stories will keep readers turning the pages as they learn about how these skilled officers stay calm, think quickly, and act fast to address serious situations in which people or animals are in danger. In addition, readers will go behind the scenes to see how these everyday heroes train for a wide variety of emergency rescues, so that they are ready to help day or night.