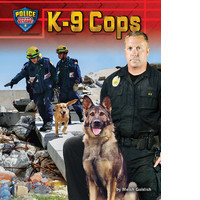 In December 2014, Kollin Bailey was running in a park near his home when he fell ten feet down a manhole. The six-year-old boy was trapped, and nobody could hear his screams for help. When he didn't return home, his parents called the police. Within minutes, the K-9 cops were on the scene. Sergeant Shane Matheson let his partner, a bloodhound named Copper, sniff items owned by Kollin. The dog quickly learned the boy's scent and went to work searching-- with his nose. Copper eventually led police officers to the manhole in the park where Kollin was found! Dramatic, true stories will keep readers turning the pages as they learn about how these skilled police responders work with their canine partners to address serious situations in which people or animals are in danger. In addition, readers will go behind the scenes to see how these everyday heroes, and their dogs, are trained for a wide variety of emergency rescues, so that they are ready to help day or night.