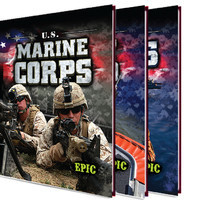 The United States military is the largest in the world. The Air Force, Army, Coast Guard, Marine Corps, and Navy work together to protect the interests of the United States and its allies around the globe. Each branch also has Special Forces that carry out incredibly difficult and dangerous missions. This series explores the five branches of the Armed Forces and their respective Special Forces.